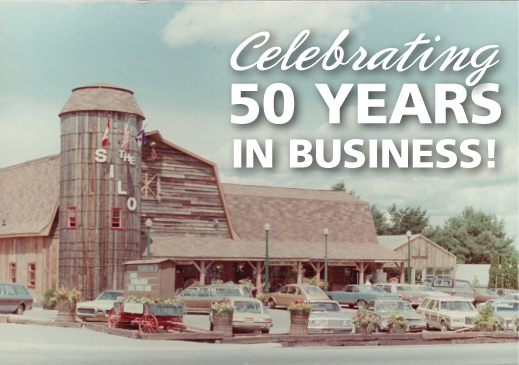 It all began in the late 60’s when Harry Troelstra brought his family to Upstate New York from Central New Jersey taking ownership of Oudekerk’s Garden Center on Dix Ave. in Queensbury. In 1975 Harry expanded to a second location and found four acres of vacant land on Quaker Road and started the garden center we now know as Garden Time.  As a year-round business, selling bedding plants, trees, shrubs and nursery plants, Harry brought in his sons as they graduated from college; Frank in 1980 and over the years Fred, Eric and Jim.
Over time the business expanded to include the following services: landscaping, lawn irrigation and maintenance, and snow plowing. The business continued to evolve over time to become the leading outdoor structure provider and installer in the twin states. Expansion continued in 1982 with The Silo.
What was once a Texaco station quickly transformed with Harry’s vision. Harry found two barns, one from Washington county and one from Saratoga county and quickly got to work. Both were disassembled and moved to their current Queensbury location where they were reassembled to created what is known today as The Silo. The business started as a farm stand, gift shop and deli and over the course of time evolved into a full scale restaurant serving the regions’ best breakfast and lunch and winning many Best of the Best awards over the years. If you have ever eaten there you can attest to their delicious over-sized portions known the world over!
The Troelstra family would like to thank our loyal customers and exceptional employees. We are humbled and thankful for their support over the last fifty years!